Again, the day was a glorious one with the weather warm, the sky deep blue and the wind coming from a fair direction pushing me to the south and to the Latvian border. The spring is in full swing here and I found the “stealth” campsite of a lifetime.

I left the Estonian campground by the sea early in the morning. During the night another camper arrived with his motorhome and two dogs. Both of them were unchained outside when I crawled out of my tent, and both of them were running towards me barking and posing dangerously. Of course, these were city dogs, all bark and no bite, and both put their tails between their legs when I took a step towards them. Fully conscious that courage comes with greater distance, they continued to bark at me from a safe distance. Harmless dogs, but at the same time I must admit that I am already fearing the dogs in the Balkan area and Turkey, and for that reason I got vaccinated against rabies.

After about 15 km I reached the Latvian border. A very deserted border crossing on a Sunday morning. The border town of Ainazi was very quiet, with quite a number of impressive houses which were somehow related to a naval academy which they had been in the time for a very long time. Cycling was a bliss, there were, however, disturbing occurrences. Large military convoys moved north and south on the Via Baltica. At least five military convoys I counted with lots of armoured vehicles, main battle tanks and other support vehicles. Each time these conveys were accompanied by military police which ensured that the streets were free of other vehicles so that there would be no interference with the convoy. Every time I heard the sirens I stopped not wishing to confront a main battle tank with my bicycle, although considering the heavy load of my bicycle someone could consider me the bicycle equivalent of an MBT. It appears that the Ukraine situation puts the Baltic State’s military on a very high alert.

Since it was Mother’s Day, certain duties (and pleasures) awaited me. I had to phone the two mothers in my life – my own and my wife, the mother of my three sons. I found a nice and sunny spot on the edge of the forest and made facetime calls to them and had a lovely exchange of news and gossip. It was good to tell them about my latest experiences and adventures.

On the recommendation of a friend, I went to see the Vetszemyu cliffs, which are remarkably interesting red sandstone cliffs, quite colourful with grottos and caves formed by the sea. Although it is certainly worth seeing this place, the 4 km gravel road leading to it is every cyclist’s nightmare. Washboard to the limit. One cannot cycle more than 6-7 km per hour and even at this speed the danger that fillings in your teeth are shaking loose is real. The pain of cycling this road twice was somewhat mitigated by the excellent gnocchi dish I ate in the restaurant. It blew me simply away.

My day ended somewhere near Saulkrasti. After 93 km cycled, I just wanted to find a stealth campsite raise my tent and sleep. The coastal area around Saulkrasti is densely populated, and I already believed that I would have to cycle another 10 km or so, when I saw a forest with no houses build on the waterfront beyond. I pushed my bike about 200 m through the forest and found the campsite of a lifetime. Raised above the beach by a few meters, with a lovely grassy ground between pine trees and with a view to kill. It was a heavenly spot, made to ponder the beauty of this world. I sat in my chair, drank a beer, and thought “I will never forget this place”. 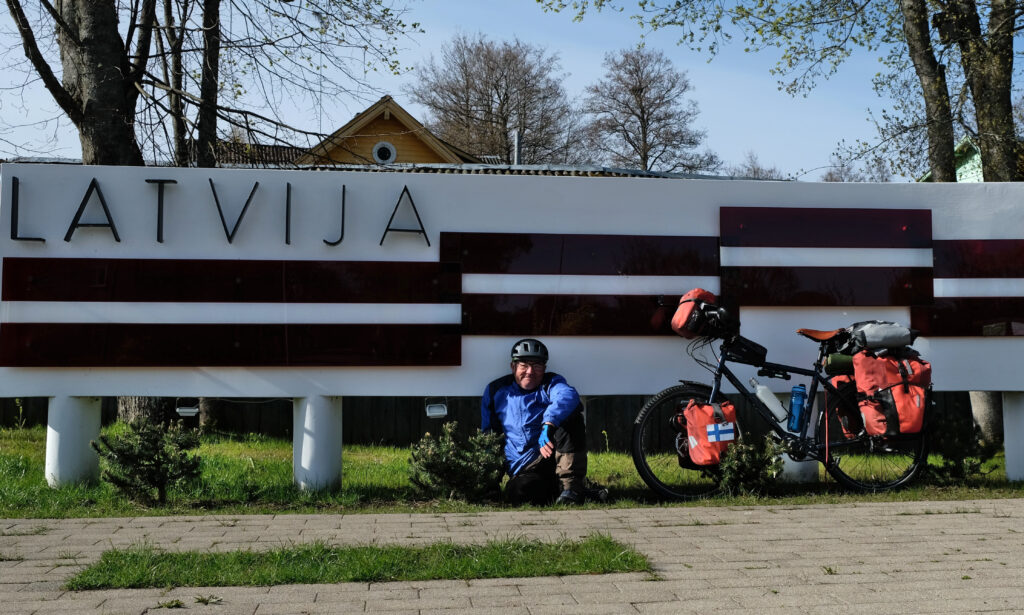